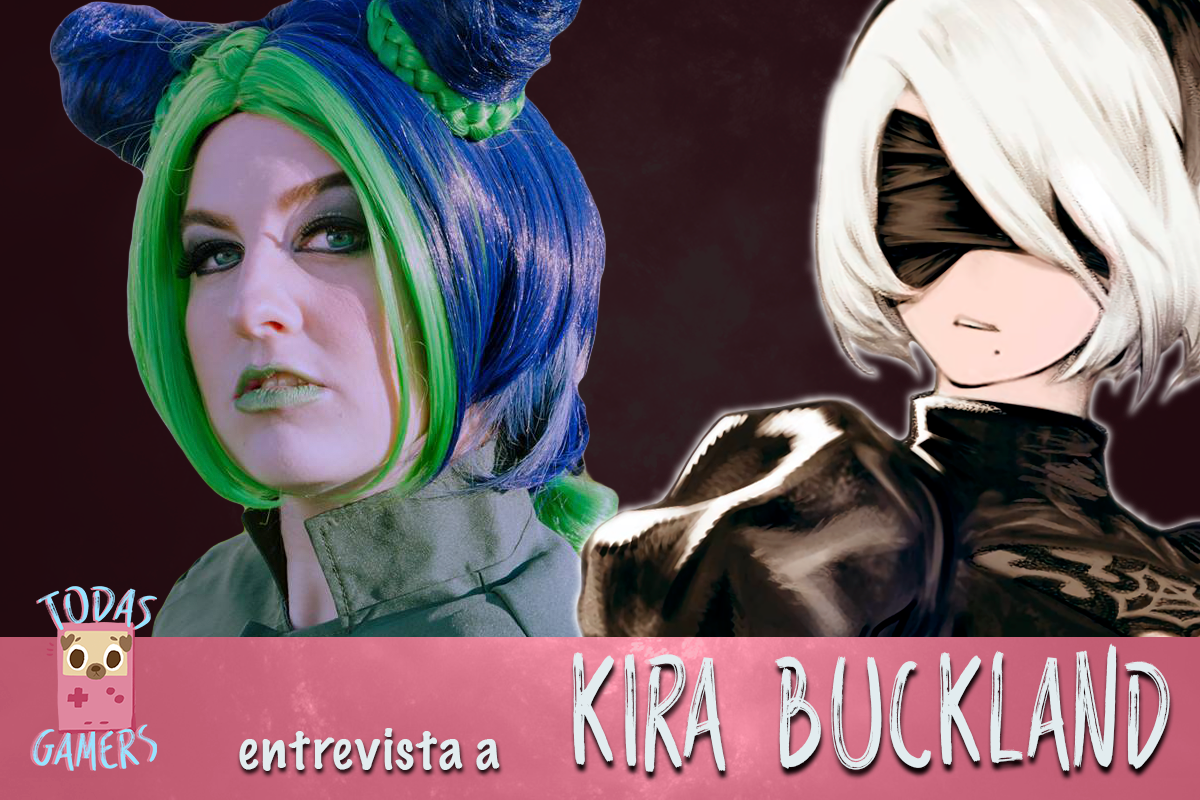 Kira Buckland is a voice actress know for her main role in NieR: Automata. She has also played other characters like Trucy Wright in Ace Attorney, Hiyoko Saionji in Danganronpa 2 or one of the avatar voices in Xenoblade Chronicles X. Since we loved NieR:Automata we have asked her some questions about her work.

The translated version of this interview can be read here.

Todas Gamers: How did you start to work as a voice actress? What would you advise to someone who wants to work as one?
Kira Buckland: I actually started out doing it as a hobby for online projects (Flash animations, student films, independent games, etc.) and eventually got my start in the industry after winning a contest held by an anime dubbing studio and subsequently moving to California. I recommend that other people start doing it as a hobby first, too—it takes the pressure off, and they can see if it’s something they like to do. Plus, it’s a good way to practice (I founded a site at www.VoiceActingClub.com that is a forum for aspiring voice actors to share tips and find auditions.) I would also very much recommend taking acting classes, because voice acting is still a form of acting. Being able to portray the character’s personality is more important than how many voices you can do or whether you have a «good voice». There are parts that everyone can fit.

TG: What kind of characters do you like to play? Which ones do you think are the hardest to perform as?
KB: I like playing «mean girls» and anyone with lots of attitude. I’m used to playing roles where I can show lots of emotion, so 2B was a big challenge for me because she keeps herself under control most of the time. I feel fortunate that I’ve gotten to play all sorts of characters and challenge myself as an actress in many ways.

TG: 2B has a very serious and professional attitude, you can tell by her voice and the way she talks. How was the voice acting process?
KB: To be honest, I was surprised I got to audition for her in the first place because she is much more serious and mature than the characters I tend to play. I didn’t expect I would get the part, but I still had a lot of fun with the audition and tried my best, so I was very happy when I got the news and especially when I realized that she’s essentially the main character. One of the things we had to be careful about in the voice acting process was not making her sound too snarky or mean, which is my tendency sometimes—she has a few moments like that, but overall she really does care deeply for 9S and when you play through the game you understand her reasons for coming across so cold at first. It also helped that I got to listen to what the Japanese actress did—sometimes we ended up going in a slightly different direction, but I really like having a reference for each line.

TG: What do you think about the relationship between 2B and 9S? Do you believe that the nickname “Nines” was a 2B invention?
KB: I’m actually a big fan of 2B and 9S together—I just love them so much and want them to be happy! And even though it’s heartbreaking when she refuses to call him «Nines» at first, it makes it feel so much more powerful when she finally does. (After the game came out, I became friends with 9S’s actor Kyle McCarley, and I like to call him «Nines» for fun! He calls me «Toobs» in return.)

TG: I’ve seen some of your streamings with Kyle McCarley (9S voice) How do you think the streamings are contributing to the videogames world?
KB: I think people really enjoy seeing the voice actors get into the games they’re a part of and interact with the fans. When we played on the stream we were experiencing those moments ourselves for the first time, so they got to see our reactions—laughing and crying along with them. And people love it when we act like our characters for fun. Unfortunately a few people were very negative, and I worry that may put off more voice actors from doing these types of streams. But in general it is very fun.

TG: In your Twitter account you usually publish some cosplay pictures (like the very 2B) What can you tell us about your cosplayer experience?
KB: I’ve cosplayed quite a few characters—mostly for fun since I’m not very good at making costumes (I bought my 2B, but I’ve made a couple of my other costumes.) These days I mostly dress up as Jolyne from Jojo’s Bizarre Adventure, 2B, and David Bowie. But I’ve also cosplayed a lot of the characters I provided voices for.

TG: As a big fan of JoJo’s Bizarre Adventure, if you had the chance which character would you like to play?
KB: Definitely Jolyne from part 6! That is my dream role.

I’ve got you in my sights: la mirada masculina en los videojuegos

I’m not the kind of guy commenting on interviews, I’m more about reading them, liking them and sharing them… but I must break that rule here because, curious enough, it’s with people like Kira Buckland that I got interested in English dubbing for both anime and videogames, more precisely thanks to the Skullgirls cast – where Buckland plays the final boss..

I’m specially interested in how this new generation of VAs keeps evolving, a generation «born» in the indie games industry, abridged series parodies, Flash animations and amateur dubbing on their very YouTube channels, and seeing how they keep growing and showing the kind of pros they are… that’s pretty awesome.

Regarding streams… it sucks when assholes show up, but when VAs get to have fun, and the audience is part of it, and even have their time to interact with their fans in social media, being that close is amazing… even though we must be careful, they aren’t idols and we are all human – nothing bad, just people need to center themselves a bit.

And YES, I’m all for hoping that once the JoJo anime gets to Star Ocean, Kira gets to voice Jolyne!