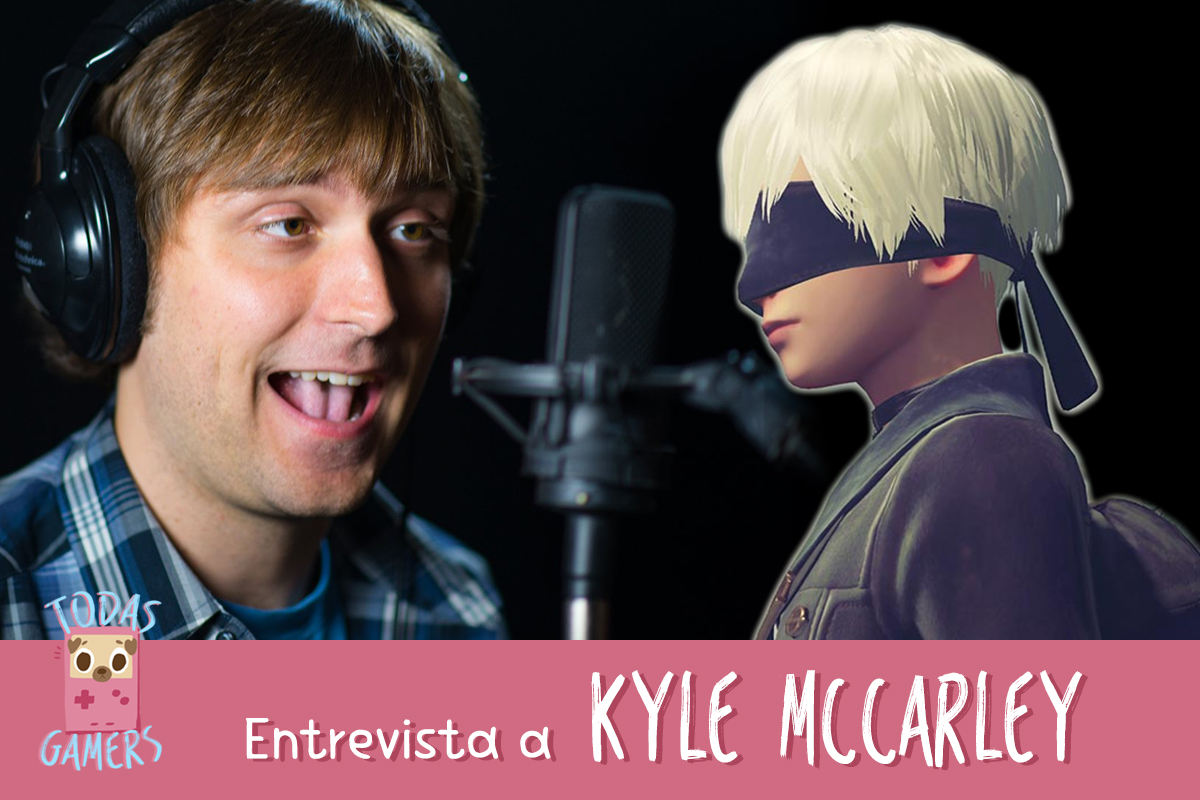 Since we loved NieR: Automata, we asked Kyle McCarley a few questions about 9S and Yoko Taro stuff. He was also Alm in Fire Emblem Echoes, and he has worked on well known anime series like Mob Psycho 100 (as Sigeo), Mobile Suit Gundam (as Mikazuki Augus) and Erased.

You can read the translated interview here.

TodasGamers: What can you tell us about your most recent works? What are the principal differences between Alm and 9S?
Kyle McCarley: Very little, unfortunately. NDA’s prevent us from discussing most of our work until it’s been released publicly, by which point we’re usually focusing on something else that’s often 10 or 12 projects later 😛
What I can tell you is that I love my job, and I’m grateful to everyone willing to hire me to do it.
Alm and 9S sound a lot like the same guy (wonder why…), but they don’t really share a whole lot in common. 9S’s personality is probably closer to my own, at least during the first half of NieR: Automata. He’s got a bit of sarcastic wit to him in addition to that happy-go-lucky feel. That is, until life goes to sh*t and he becomes emo Nines (spoilers?) “Emotions are prohibited,” but 9S completely ignores that directive right from the get-go. I love that game so much. With Alm, I struggled to keep my natural sarcastic tone *out* of the delivery on some lines early on in the game, but that’s just not who he is. He’s a noble, wholesome guy; sarcasm’s Gray or Tobin’s domain in Shadows of Valentia.

What role of the two was the most challenging?
Each character had its own challenges for me. Alm, like I said, I had a tough time making sure he sounded sincere with everything, at least toward the beginning, because I kept trying to give him a little sarcasm that just wasn’t supposed to be there. For 9S, I didn’t have any trouble getting into the mindset of the character at all, but vocally, he got *very* stressful in the latter portions of the game. I threw my voice out for two or three days after one session in particular.

9s starts as a kind and funny character but here goes full berserk, how was this process for you? Did you have any surprises reading the lines during this part?
Well, John Ricciardi from 8-4 was on hand for almost every one of my sessions, and he was pretty thorough in explaining where 9S was headed before I ever set foot in the booth. But there were a couple cinematics that made me say, “Woah,” or possibly utter an expletive or two. I knew he was going to go through hell, but I didn’t know just how bad it would get. Automata was my first exposure to a Yoko Taro game. I’ve learned a lot since then.

What do you think about 9S and 2B relationship? Having played the role for that many hours, could you offer us some thoughts about your perspective on 9S? (don’t worry about spoilers)
Oh, we’re not worried about spoilers? Well, in that case! The relationship between 9S and 2B is fascinating, and the deeper you dig, the more layers you find explaining the nature of it. Playing through the A route, you think, “Man, why is 2B such a cold hearted bitch to poor 9S all the time?” But by the time you’ve finished C & D, you’ve had about 7 different “Aha!” moments.
And if you’re a fan of the game, I highly recommend checking out the concerts. I don’t think there’s an official translation, but a group of dedicated fans on the nier subreddit did one that’s close to being on par with the work of a professional localization team, in my opinion. Those stories really expand on the backstory for both characters, as well as A2, and their relationship with each other. Kira Buckland (voice of 2B), myself, my wife, and my two roommates all did kind of an old school radio play reading of them, which you can catch on my Twitch channel (*cough* shameless self-promotion), and our reactions were totally genuine, because we were reading it cold. I learned some stuff about 9S that part of me wishes I’d known during recording. But at the same time, it makes sense that I didn’t know, because his memories have been wiped probably a thousand times over by the time the game starts. Man, Yoko Taro’s a freaking genius…

When you are playing NieR: Automata, do you prefer slashing enemies with your sword or hacking them? What was your favorite section of the game (desert, amusement park, flooded city…)?
I know a lot of people were critical of the “shmup” mechanic, but I really enjoy hacking. I do like to change it up and get a nice healthy balance of hack-and-slash kills in, too, but I probably used hacking more than most people who played it. Fitting, huh?
I think the area that gave me the biggest gut punch the first time I saw it was the Amusement Park. Part of that was the fact that for some reason, in my head, I was envisioning a barren, desolate desert landscape for almost everything throughout the recording, and the Amusement Park was about as far from that as anything else up to that point in the game. It’s also just haunting, especially with the music. It’s kind of reminiscent of Wasteland from Epic Mickey, which is heavily based on Disneyland (very familiar to me) or Magic Kingdom, except an eerie bizarro-world version of it. Any time you take something that’s supposed to be happy and pure and wonderful, then turn it into something creepy, you’re exploiting my nostalgia to make me feel pain. And I think that’s brilliant.

Alm was recently added to Fire Emblem: Heroes, do you play mobile videogames? Which one is your most played game?
I don’t play mobile games a whole lot, but I did sink some time into Heroes, trying to collect orbs and summon Alm, just because I’m a pathetic narcissist. I also voice Soren, who was added an update or two after Alm was. I finally got a 4-star Soren when they made him available (previously both were only 5-stars), but I never did get an Alm. Probably spent about 200 orbs, to no avail. I think I stopped trying around the time Echoes came out, though. I used to play Hearthstone a bit, and there was some companion app for Evolve I can’t remember the name of that I played for a couple weeks right after it was released, but I’m not much of a mobile gamer. Heroes is definitely the most recent one I’ve spent any meaningful amount of time with.

You also have worked on animes like Mob Psycho 100 or Mobile Suit Gundam, there’s any difference between dubbing videogames and anime?
Absolutely.  Very little of the audio recorded for video games, even when they’re being dubbed, has any kind of time restrictions. We’re not trying to match mouth flaps at all, aside from cinematics, and the vast majority of the dialog, at least in the games I’ve had the privilege of working on, is in-game, where the mouths either don’t move at all, don’t move in sync with the audio, or are moved by the game engine rather than by a pre-rendered animation. So you have a lot more freedom to put your own spin on things. For anime, even if the mouth isn’t seen, you’ve only got a certain amount of time to get through the line before the next one’s happening. It’s much more restrictive. Still a lot of fun to do, but it’s more technical than most character-oriented voice over work.

Most of your characters are young heroic boys, but what kind of characters do you like to play? Funny ones? Villians?
I love all my characters, but the best ones are the ones with depth. I have kind of started to fall into a pocket of young heroes lately, but a lot of the anime work I was booking when I first broke into that side of the business were villains. Aoba, Shinji, Helbram, etc. So sometimes people ask me if I prefer heroes or villains, to which I say, “I prefer characters that are interesting.” Hero, villain, funny, serious, whatever, whatever character’s the most interesting, that’s the most fun. Because what makes a hero, a hero? Why is the villain the villain? Every villain is a hero, to themselves, and an interesting hero has flaws. By the time you finish Automata, do you think 9S is a hero? Or is he a villain? I’d put him somewhere in that gray middle ground, which is part of why I love that character so much. It’s not clear-cut; he’s one of the most interesting characters I’ve ever had the privilege to play.

You usually stream on Twitch (sometimes with Kira and other voice actors), how do you think these streamings add something to videogames as a medium?
You know, when I started the Twitch channel, I didn’t think it was going to become what it is. I thought I’d play just a little bit of Automata to try and help promote the game and interact with whatever die-hard fans were interested enough to watch me. And then I quickly got addicted to the game, so I knew I was going to play all the way through, and the channel was growing so much, I decided I’d finish it live. And by the time I was done, the channel had grown its own little community, a small group of really enthusiastic fans of mine and my stream-mates. So we’ve been trying to keep it going ever since, albeit a little less frequently now than when we were playing Automata. I think it’s great. There aren’t a whole lot of channels like mine, where people can interact with voice actors while they play the games they’re in, but those of us that do them are getting a chance to interact with fans in a way we never could have prior to Twitch. And outside of the VO world, there are some really creative Twitch channels out there that give people a thousand other ways to enjoy video games beyond just playing them themselves.

And last one, since you recently recorded NieR: Automata Concert Readings do you have plans for future NieR:Automata related things (like the novels)?
The novels are one of about 50 ideas I’ve got for future streams. Right now I just want to get through Echoes, but I’d love to do more stuff like the concert readings, whether it’s NieR-related or not. I mean, I love NieR, and I’m not done with it by any means; I also want to finish playing through the first game at some point. But there’s a very finite amount of content like those concert scripts, and that was way too much fun to limit it to just Yoko Taro’s universe.